The idea of a democratic system is aimed at becoming an instrument of limiting political power, since if political power is not restricted, it will only produce an authoritarian system of government. Therefore, the term -‘constitutional democracy’- was born, namely governance based on the foundation of the constitution. This model asserts that the government is not based on power, but based on law or rule of law. Democracy will only work well in a country when it comes to designing various models of political systems that can support it. The presence of the People’s Consultative Assembly (MPR RI) in Indonesia, in the scheme of a presidential governmental system is certainly intended to contribute to constitutional democracy. Because, in the view of Alfred Stepan and Cindy Skach, democratic politics in the present context is not only measured at the high achievements of social and economic conditions of a nation, but also depends on the extent to which the design of political institutions in a country can affect the effectiveness in the course of a democratic government. (Stepan, 1993, p. 1). Often the development of the Indonesian state administration system after the 1945 Constitution of public attention is more directed to the DPR because much more can be seen and felt, although the results are not satisfactory. (Sherlock, 2010).

On the contrary, the public’s attention to the MPR RI institution is almost zero, as well as its performance cannot be seen or felt directly by the people, also because its function in the 1945 Constitution post-amendment is systematically weakened from the “highest state institution” to only “the state high institution”. (Assiddiqie Jimly, 2004, pp. 38-39). The relationship between MPR RI and other state institutions is only functional – horizontal rather than vertical-structural. The existence of the MPR RI seems redundant, because it only meets once a year in five years according to the intention of Article 2 Paragraph (2) of the 1945 Constitution after the amendment and Article 199 Paragraphs (1) and (5) and Article 268 Paragraph (1) and (5) of Law No . 27 of 2009 on MPR, DPR, DPR, DPRD (Law Number 27, 2009).

The rest of the MPR’s performance only focuses on routine Socialization of 4 (four) Pillars of Statehood Life: Indeology of Pancasila, Constitution 1945, The Unitary State of the Republic of Indonesia (NKRI) and Diversity in Unity (Bhineka Tunggal Ika). (Yani, 2012).

Therefore, this present study aimed to analyze, firstly, the reason why is it necessary to strengthen the authority of MPR RI post-amendment constitution 1945. Secondly, what are the efforts to put forth to strengthen the authority of the MPR RI to create checks and balances of relationships between state institutions in the scheme of Indonesia presidential government system.

This is a socio-legal research, ie legal research using interdisciplinary as research in social science, because the definition of law varies greatly in context. (Micheil, 2007, pp. 14-15). This study focuses on the source of legal materials and library data or documents (library research). Library research is intended to obtain secondary data, in the form of primary, secondary and tertiary legal materials. Among others: the 1945 Constitution before and after the amendment, Law No. 17 of 2014 on MPR RI, DPD RI, DPR RI and DPRD, and various articles of journals and books related to the issue of MPR RI. Then proceed with inventory, examine or test the legal materials or written data relevant to the object of research. 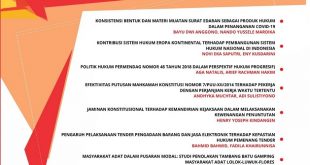 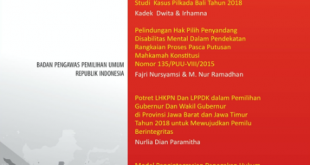 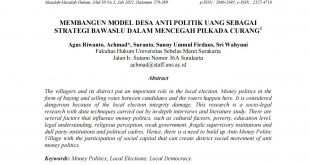